International Mother Language Day Program was observed by the students of YURIKO ANGEL SCHOOL on 21st February 2016. Students took part in Art Competition, opened Wall Magazine, and arranged cultural program with Speech, Dance and Music. In 1952 Period of Pakistan government imposed URDHU language to Bengali People. Then students of all over Bangladesh were against it. Students were killed by the Pakistan Police that time on demonastration. From that year(1952) the 21st of February observed as  Mother Language movement  day. In 1999 UNESCO announced the day as International Mother Language day. 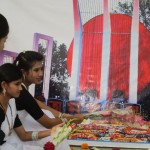